Sing Up for Chat & call with Advisor Free 5 min

Are you in a relationship that’s gone south? Have you scratched your head over a looming change at work or in your life? Like most people, you might feel alone and helpless when dealing with challenging situations.

Many of us have gone through rough patches in our lives, where we feel like all we can do is look forward to the day when things will improve. However, if we are not careful, the grief and despair can start to run out of control and hold us back from moving on. This is when it’s good to fall back on more old-fashioned methods of fortune telling — tarot cards. 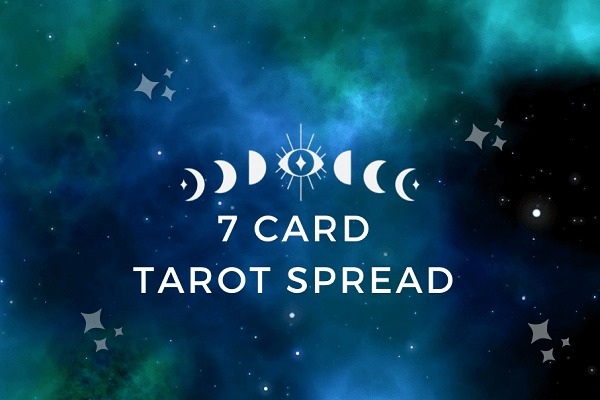 What are 7 card tarot?

The world uses the great idea of tarot card reading to benefit humanity. It helps people forecast their future and informs them of previously undisclosed facts. Tarot is essentially a deck of cards, and reading tarot cards involves doing just that. Tarot card reading can make you happier by exposing you to life’s hidden mysteries.

You probably already have a go-to spread if you have been using tarot cards for a while. A 7-card tarot spread is one of the most common basic spreads if you haven’t tried it yet. Simple, open-ended questions can be answered well using this type of structure.

Let’s look at how to use tarot cards and why 7 card tarot spread is popular.

The use of tarot cards for divination dates back to the 15th century. The word Tarot comes from the Italian tarocco, which means “royal.” These cards were created for royalty in Italy as a pastime or entertainment.
The Tarot has a long history of being used as an oracle to reveal hidden truths about people’s lives. Tarot cards have been used since the 15th Century in Europe as a form of divination. Some psychics and mediums have also used them to gain insight into a person’s past, present, and future.
Read More: 4 card tarot spread

How Do You Use Tarot Cards?

The Tarot cards are used for divination and can be used to answer questions about anything. Depending on your preference, you can read tarot cards or consult a tarot reader.

Most tarot readers prefer to do tasks face-to-face rather than over Skype or other forms of video chat. This allows them to see your reaction when they give their interpretation of what the cards mean, which often helps them get more accurate results. 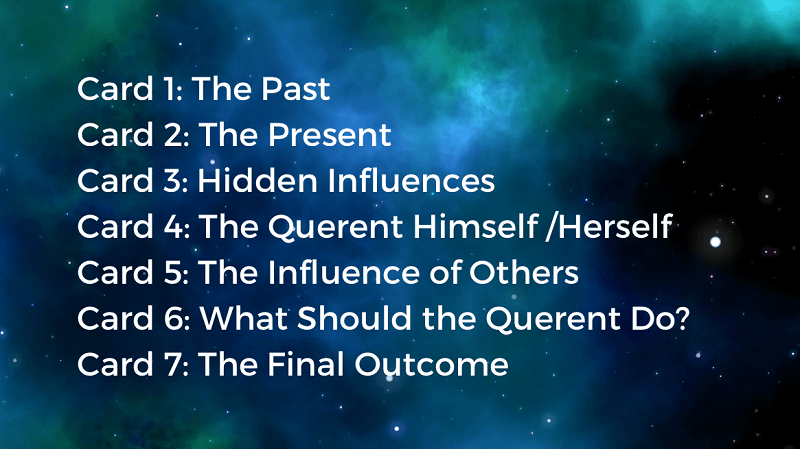 What is a 7 Card Tarot Spread?

Have Question ?
Sing Up for Chat & call with Advisor

The 7 Card Tarot Spread overviews your current situation and what lies ahead.

The past, present, hidden influences, the Querent, other people’s views, what the Querent should do to address the issue at hand, and the outcome of the circumstance are all represented by the cards in this variation of the 7 Card tarot spread.

Here’s a detailed overview of what each card in 7 card Tarot spread represents:

The first card in 7 Card Tarot Spread represents all the experiences, people, and events that have helped shape who you are today. This card may reveal what has happened in the past and how it is affecting the present. For example, if the first card in the 7 card Tarot spread shows a person walking through a field of flowers, it could mean that they have been through a painful experience but have learned from it.

The second card in 7 Card Tarot Spread represents what is happening right now in your life. This card could reveal something about your current situation or relationship. For example, if the second card in 7 card Tarot spread shows two people holding hands with their backs turned to each other, it could mean that there is some misunderstanding between them, and it needs to be resolved as soon as possible before it gets worse.

The third card in 7 Card Tarot Spread reveals hidden influences on your situation or relationship. For example, if the third card shows a woman sitting on her bed looking at her cellphone with tears in her eyes and some pills next to her on the nightstand, this could mean that she argued with someone close to her over social media (the first two cards) and now feels depressed as well.

The Querent is the person asking the question. This card in 7 Card Tarot Spread represents the core of the question and can be read as a literal answer to the question. It can also be used to describe the general atmosphere surrounding the situation at hand.

This card in 7 card Tarot spread shows us that there are no correct answers here – just as there are no wrong answers in life – only choices we make for ourselves affect how we see ourselves moving forward.

Card 5: The Influence of Others

This card in 7 Card Tarot Spread shows how the Querent views themselves and their lives. It can be an aspect of their personality or a belief they have about themselves that they are not aware of. For example, if they believe they are an outgoing person but, in reality, they are timid, this card will reveal this discrepancy. This card also represents people who influence the Querent’s life, whether family members, friends, or coworkers. These people are often close to the Querent and may strongly influence them.

Card 6: What Should the Querent Do?

Of the 7 Card Tarot Spread, Card 6 is Five of Cups. It shows a person with his head bowed as he looks sadly at five empty cups on the ground around him. This card means there is still sadness in this situation, but it will pass with time. In the present and the future, the individual must focus on what is important now and not dwell on past mistakes or failures.

The outcome card in the 7 card Tarot spread is known as the “Judgment” card. If it’s negative, then you’re facing something to overcome. It could be a loss of a job or a relationship. Positively, this card also shows what you can gain from the situation. It may show financial gain or an improvement in your health.

This card, in a reading of 7 card Tarot spread that has nothing to do with your question, the task will probably not benefit you. However, if it does seem to relate to your question, then pay attention to what it says about your future because it could say that things will work out just fine for you.

Read More: How often should you get a tarot reading?

How Real is the 7 Card Tarot Spread?

The 7 card tarot spread is an intelligent way to gain insight into your situation. It’s a great way to learn about tarot reading, as it can be performed as a simple yes or no question.

However, many skeptics believe that the 7 Card Tarot Spread is not natural and that it’s just something invented by people in the entertainment industry to help make their predictions more accurate.

According to tarot expert Doreen Virtue, “In this simple 7 card tarot spread, you will see all seven energy centers reveal themselves in front of you so that you can make choices based on what is best for your soul’s evolution at this time.”

Many people indeed use the 7 card tarot spread for entertainment purposes, but it’s also true that some people use it for genuine divination purposes. The truth is that there are no actual rules for performing 7 Card Tarot Spread. No regulations exist regarding how many cards should be drawn from each deck or in what order they should be removed!

Even though no one can guarantee love, you can determine if your prospects look favorable with a quick and easy reading of the cards. The 7 card Tarot spread is a simple way to indicate if there’s hope on the horizon. Since many factors contribute to our romantic relationships, it may be difficult to pinpoint every potential stumbling block.

However, by reading 7 card Tarot spread as a guide, you can anticipate potential problems and seek ways to minimize them ahead of time. The 7 card Tarot spread provides insight into the following areas: your emotions surrounding this relationship, your hopes, and fears, what you truly desire in a relationship, what the current obstacles are in your relationship and how they can be overcome, and your general feelings toward this individual along with any advice from Spirit on how it could work out positively for you.

Sing Up for Chat & call with Advisor

Navigating the world of online psychics can feel as mysterious as the practice of a tarot card reading – we get it.